India wants to reap the benefits of Islamophobia from which the world is suffering…. the Indian government has to reconcile its own people to body bags coming from Kashmir…. If the Indian people were told the truth that Kashmiris don’t want to be with India, and the struggle here is sustained by them primarily…. the public opinion in India too would change. To not allow the public opinion to change, these lies about Pakistan-sponsored proxy war are told. For us, the Indian media is clearly a part of India’s military industry in Kashmir.
— Khurram Parvez, Scroll.in, July, 2016.

India, you will be celebrating your 70th year of Independence from British rule on August 15. All over the country all of you will be remembering the fallen, hoisting flags, and singing songs of freedom. Meanwhile in Indian-administered Kashmir — the largest militarized zone in the world — the Indian state and its military and paramilitary forces will continue to carry on with their sustained human rights abuses aimed at the regions indigenous population.

Many around the world often pose this question: Why is Indian civil society silent about its country’s brutalization of Kashmir civil society? It’s a very good question. Every freedom-loving Indian needs to ask it.

Perhaps nothing would convey patriotism better than chanting slogans that condemn your own country’s occupation of another. Why not? Instead of singing songs only about your own “freedom,” why not sing one acknowledging an occupied people’s desire to be free? Especially when it’s you they want to be free of.

Here’s one y’all might want to sing in solidarity with your Kashmiri brothers and sisters on Tuesday. It’s a take on the Hindi patriotic song Aye Mere Watan Ke Logo (O people of my country) that remembers Indian soldiers who died in the Sino-Indian War of 1962.

tiranga (Indian flag)
Firdaws (Paradise)
azad (free)
Azadi (freedom)
Holi (festival of colors)
Arnab Goswami (television news anchor)
lathis (truncheons)
Dardpora (‘Abode of Pain,’ is a hamlet situated in the northern edge of Indian-administered Kashmir, and is home to hundreds of widows, and ’half widows’ [women whose husbands have disappeared]).

The 2009 edition of the Guinness Book of World Records declared Kashmir as the world’s “largest and most militarized territorial dispute.”

O proud patriots of India, shout your slogans
This auspicious day belongs to a few of you,
Go hoist your beloved tiranga
But don’t forget, that in occupied Firdaws,
Tens of thousands have lost their lives
Give a thought to them
And remember that until Kashmir is Azad,
Thousands more won’t be returning home

O proud patriots of India, fill your eyes with tears
Remember the humanity of those whose only desire is to be free
Of you

You got your freedom, but deny Kashmiris theirs
They too will fight until their last breath
Their bodies coming out on the streets and no fear of death
Their eyes pierced with little lead pellets,
They stare at your hollow freedom with dissenting eyes
Remember that Kashmir’s struggle for Azadi will not cave, just like India’s never did

When your country celebrates so-called freedom,
Your troops are playing Holi (with their blood)
While you sit safely in your homes watching Arnab Goswami,
Kashmiris brave your guns, night raids and lathis
Young men, women and children come at your military,
With stones in their hands and freedom in their eyes
Remember that Kashmir’s struggle for Azadi will not cave, just like India’s never did

Unknown, unmarked mass graves, clandestine graveyards
Extra-judicial killings, enforced disappearances
Dardpora’s widows and half-widows, All victims of state terrorism
The blood shed in Jammu and Kashmir, that blood is indigenous
Remember that Kashmir’s struggle for Azadi will not cave, just like India’s never did

Their bodies are drenched in blood, yet they brave your military
Countless cases of torture and sexual violence by the world’s largest democracy
Kashmir weeps at your hypocrisy
And in their continuing struggle, they tell one another, “We will live another day”
“Be strong, my beloved fellow Kashmiris”
“We’re going to get Azadi” 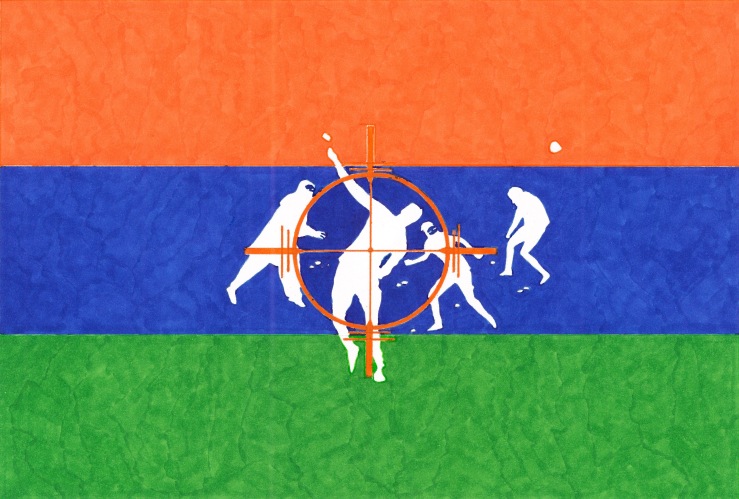 The sang-bazan (stone pelters) of Kashmir, #11 in the series JatiIndia: Flags of Atrocities Caste, Present and Future.

According to Noam Chomsky, “Technology is basically neutral. It’s kind of like a hammer. The hammer doesn’t care whether you use it to build a house, or whether a torturer uses it to crush somebody’s skull.” One can probably say the same thing about Indian Democracy. That it’s fairly neutral. It’s kind of like the country’s flag. The tiranga doesn’t care whether you use it as a medium to communicate the truth about a state’s atrocities, or whether a Bollywood actress makes history by being the first woman ever to hoist it.