Two things in America create “bipartisanship”: support for Israel’s apartheid regime and support for endless US war and intervention around the world.  — Ali Abunimah, October 16.

It’s September-October and I’m sitting at my Sidewalk Museum of Congress (SMoC) studio outside Kansas’ 1st District Rep. Roger Marshall’s office embroidering portraits of the Palestinian al-Farra family, most of whom were killed by “Operation Protective Edge,” the 2014 Israeli assault that began on July 7 and lasted 51 days.

Directly behind the spot where I’m sitting is Roger’s oh-so-patriotic-and-festive red, white, and blue window display that includes the word ‘FAMILY’ in all caps, Trump-style, positioned prominently in the center. What’s subliminal in the display is a preceding word, WHITE. 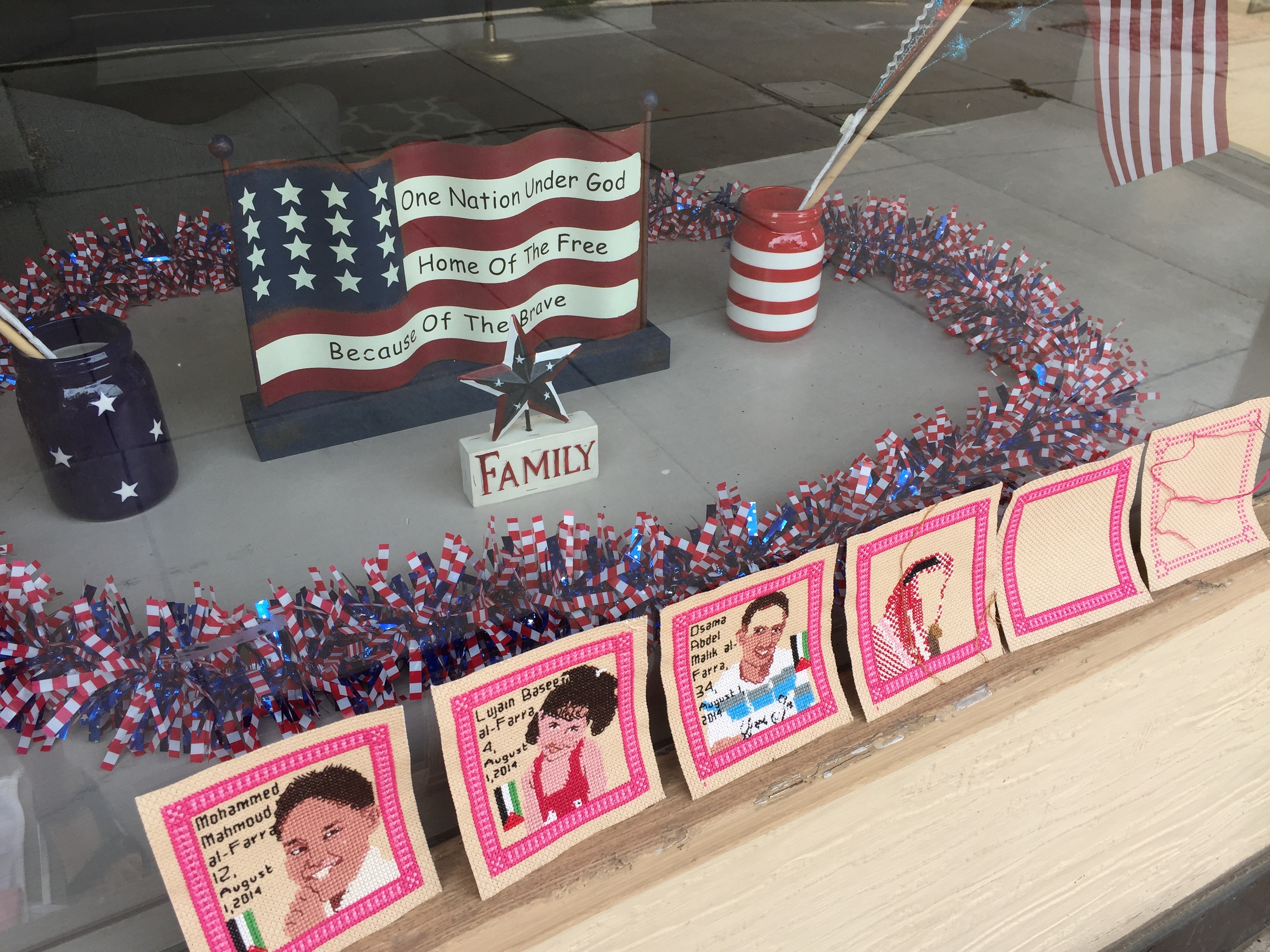 Our government policies past and present have done nothing to address and hold accountable the uncountable atrocities that have been carried out by Israeli Occupation Forces and Israeli settlers on the Palestinian people on a daily basis. It in fact continues to support the occupation politically, diplomatically, financially and through podium-words like these by Democratic candidate Elizabeth Warren, with which she claims that a two-state solution has been the “official policy of the government of Israel.”

It doesn’t matter whether my Representative is a Republican or a Democrat when it comes to policies of war, intervention and occupation. In that regard they are in fact one family, one party.

For me, this is a moment where you really have to say enough is enough. And where you have to search for the right words to convince those who have the power to stop this. — Jan Eliasson, U.N. deputy secretary general, Gaza crisis: UN & US announce ceasefire, the Guardian, July 31, 2014.

Not long after a ceasefire had been announced, the sound of an explosion and broken glass woke the sleeping al-Farra family at around 3:00 AM on August 1, 2014. They were one of six families who lived in a three-story house in Khan Younis in the southern Gaza Strip. According to a UN Human Rights Council report, “As neighbors alerted them that their roof had been hit and was on fire, the children were rushed downstairs and told by their parents to run out of the house in fear that a second strike may hit the house. In their pajamas and bare feet, the children and four adults ran down a narrow road in front of their house.” Members of the al-Farra family were barely 30 feet away from the house when another missile landed at their feet, killing nine of them and injuring two other family members including a 4-month-old baby who was wounded badly in the abdomen.

I stayed inside to wake one of the children up. When I went out I found all my family either injured or dead… These criminals will never been brought to justice. All countries stand with Israel. They give us food and give Israel weapons to kill us. — Basem Abdel Malik al-Farra, Al Mezan Center for Human Rights. 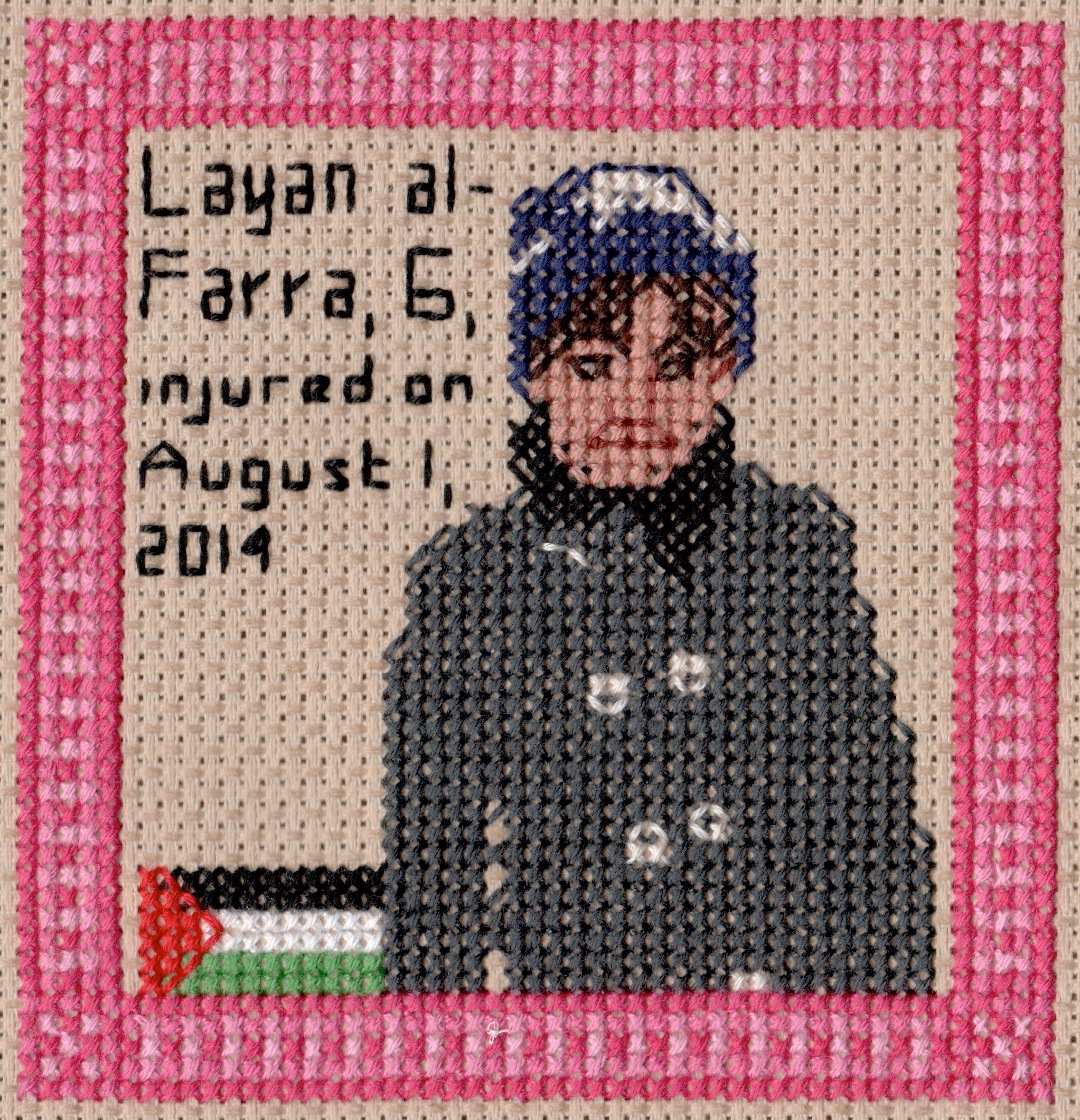 Basem al-Farra and his 6-year-old daughter Layan survived the attack. Basem says, “at the ‎beginning Layan was reluctant to go to school and still suffers psychologically.‎”

Basem’s 31-year-old pregnant wife, Awatef al-Farra (The embroidery includes the bicycle of Abdel, Basem and Awatef’s son, in the rubble of his room); 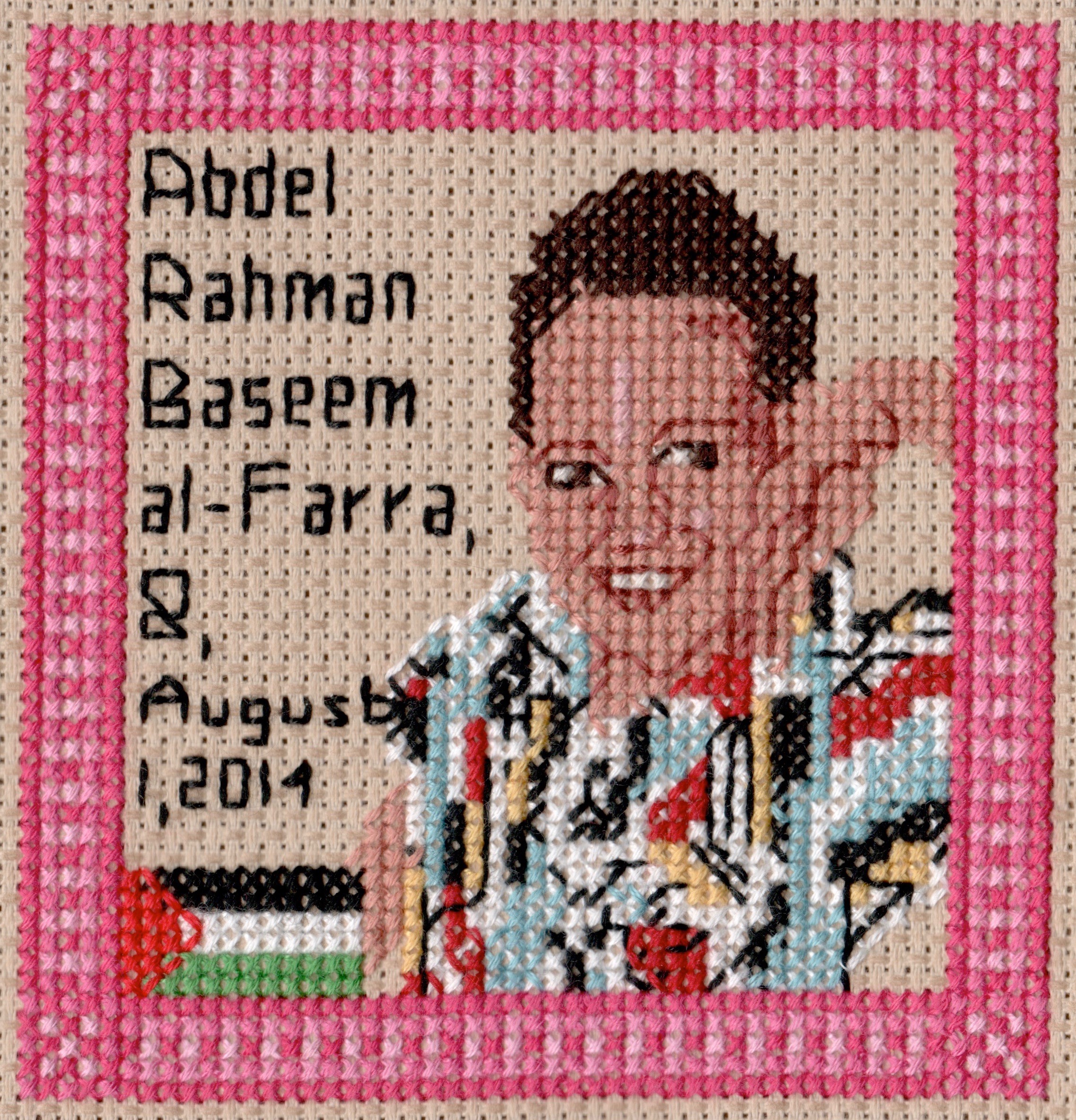 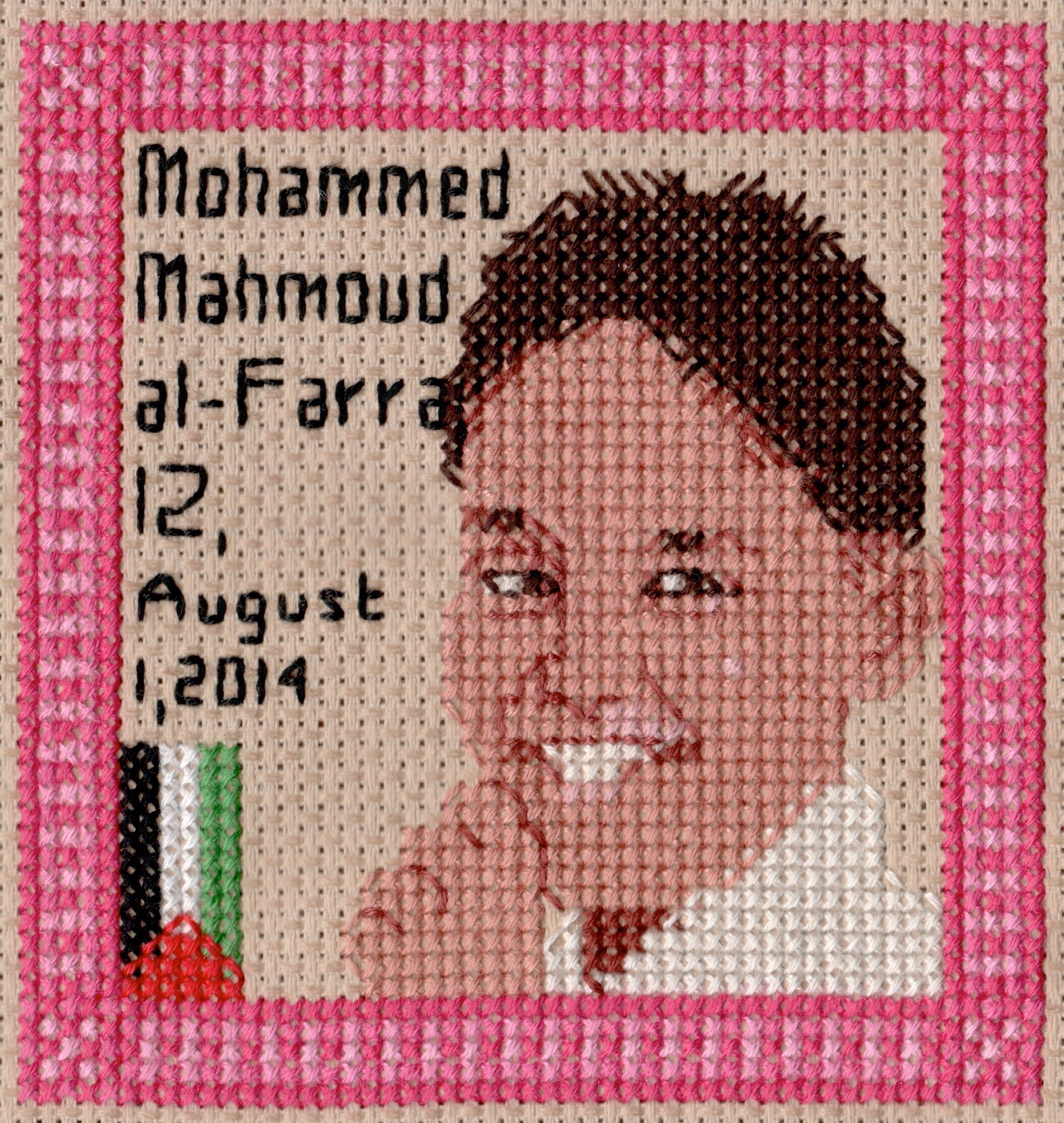 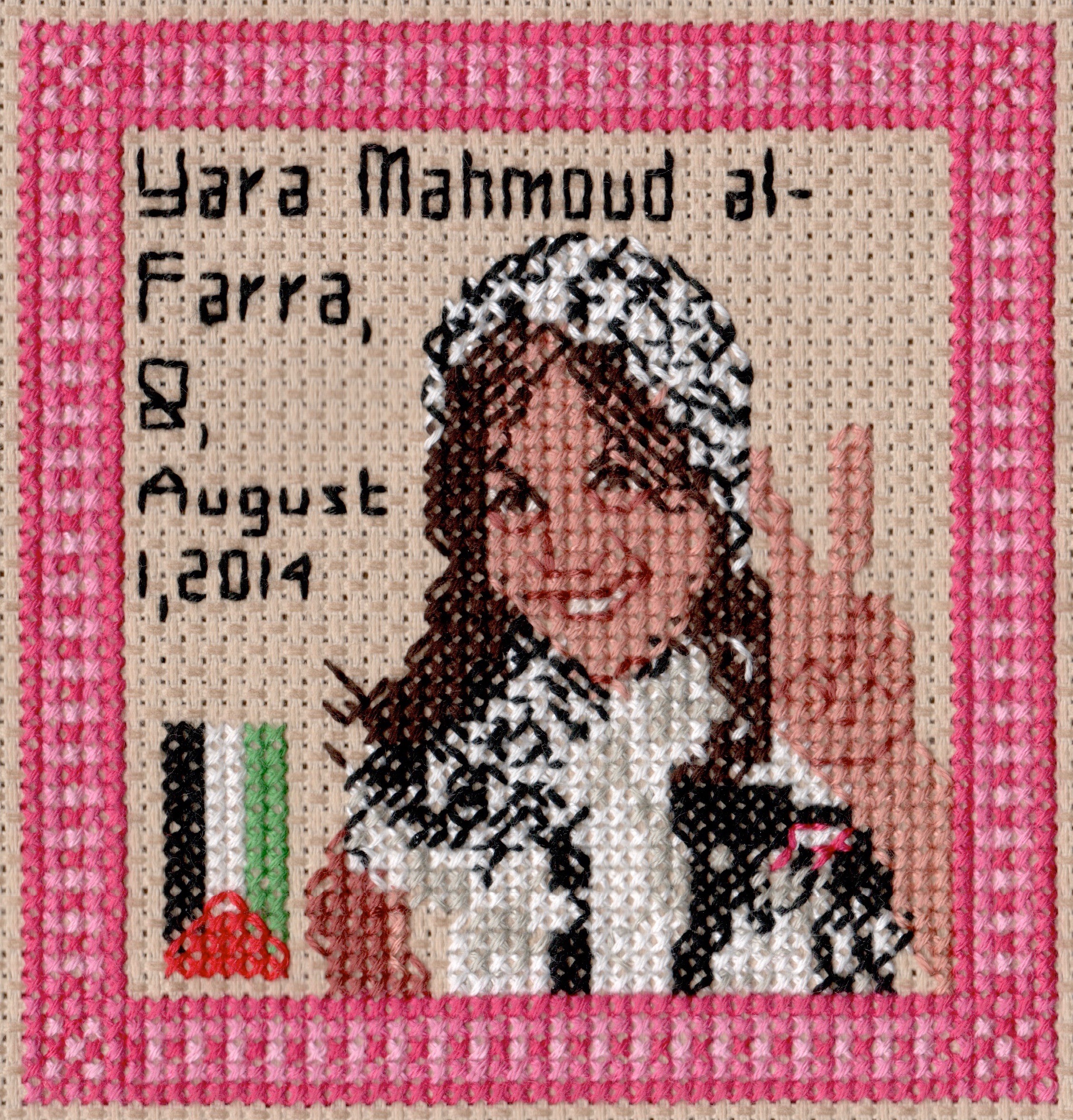 According to the United Nations Office for the Coordination of Humanitarian Affairs, “The commission received information indicating that one of the male family members killed in the attack worked for Hamas, but it is unclear what his functions were. He lived on the top floor of the house, which was completely destroyed, but had not stayed there regularly after the start of the conflict. He was among the group of people who were killed in the street by the second strike.”

When I’m out there at SMoC working on Patterns of Occupied Palestine, I display printouts of various Roger Marshall quotes next to me, like this one:

Hamas fires rockets from Gaza to kill innocent men, women, and children. In return, Israel hits terrorist leaders and operatives with precision strikes. No other nation on Earth would tolerate these hateful attacks. We must continue to support Israel’s right of self-defense. — Toadie-in-chief-for-Trump Roger Marshall, May 8.

Apparently, the killing of most of the al-Farra family was in Roger’s view a “precision strike.” I juxtaposed his comments with a counter-quote by a Palestinian victim of Israeli occupation like this one:

My heart broke every day my daughter was away… Why does Israel treat us like this? We are not affiliated to any political faction, we are just normal people. — Muna, The Electronic Intifada, June 5.

About three weeks after Marshall’s May 8 tweet I was embroidering a portrait of Muna’s 5-year-old daughter Aisha Lulu who was diagnosed with brain cancer in April. The Israeli military denied her family permits to accompany her to the hospital. She died on May 17.

So when Marshall tweets about Hamas killing “innocent men, women and children” and Israel hitting “terrorist leaders and operatives with precision strikes” he ignores these details: of the 2,251 Palestinians killed by occupation forces in the 2014 attacks, 551 were children and 299 were women; 142 Palestinian families, including the al-Farra family, had three or more members killed in the same incident; and Israeli deaths totaled six civilians and 67 soldiers.

Whether it’s the May attacks of this year, in which 30 Palestinians were killed, or the 2014 attacks, the victims are disproportionately Palestinian and the political rhetoric is always the same: Hamas is blamed for everything.

Israeli strategy is collective punishment for the Palestinians and exceptionalism for itself. There are no citizen-winners here — not the Palestinians, nor the Israeli population, nor us Americans.

Jan Eliasson’s words convey the powerlessness of words when those in power choose never to be moved by them. In fact, they have very successfully exploited this resource like every other resource on the planet to their advantage and have created their own thesaurus. For example,

Remember the words Benjamin Netanyahu spat out soon after the September 11 attacks? “It’s very good,” then correcting himself said, “Well, not very good, but it will generate immediate sympathy,” meaning for Israel.

There are no “right words to convince those who have the power to stop” whatever the “this” is in the context of war, intervention and occupation—not as long as we allow the language of our public servants to occupy our political dictionary.