The title for this series of painted flags, Jatiindia, is my name for the country of India, a nation of jatis (castes). India still practices this worst form of social exclusion in the world, now more violently than ever in this neoliberal age.

The saffron color of the top bar symbolizes long-existing casteism, now made more open and feverish by resurgent hindutva politics.

The bottom green bar symbolizes India’s ecological foundations, which are endangered by the ideology of neoliberalism and defended by our Adivasis and other oppressed people.

The circular image in the center of each flag signifies a target viewed through a weapon’s saffron (indicating right-wing nationalism) crosshairs.

The series moves between the past and present, bringing forward some of the targeted faces of resistance who have challenged the stagnant ideology of exclusion in The World’s Largest Hypocrisy: Dalits, Adivasis, Muslims, Christians, occupied Kashmiris, India’s northeasterners, and others who have been caught for the longest time between the old and the ever-mutating new—between the dogmas of religious scripture and state-sponsored terrorism.

The first flag of this series depicted Rohith Vemula, the 26-year-old son of a landless Dalit mother, who hanged himself in a student hostel room on January 17th, 2016. Many in India have referred to his death as murder, because it encapsulates the continuing struggle confronting a cross-section of the country’s oppressed. 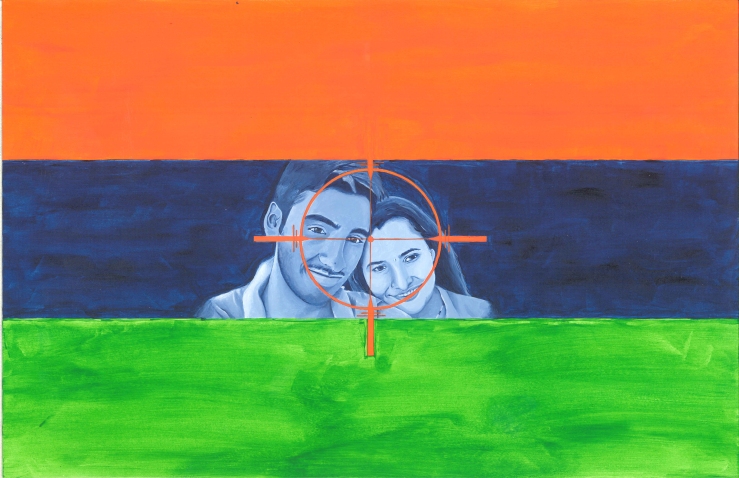 Vinay Sirohi with his wife, acrylic on paper, 2016

On November 11, 2015, the day of Diwali (a major Indian festival), 22-year-old Vinay Sirohi, a contract worker at the Keshopur Sewage Treatment Plant in New Delhi suffocated to death, stuck in a narrow pipe. Officials said that “he was not wearing a safety helmet, face mask or even gumboots.” “No foul play behind death,” said one cop. The question to ask here is whether a face mask, helmet and gumboots would have been enough to insulate Vinay from death by suffocation, much less from the ravages of Jatiindia and human sewage intervention. There was no foul play involved? Really? Can’t we see that the “foul play” is systemic and was already in place in a country where the occupation of manual sewage scavenging is still the order of the day, despite it having been outlawed by Jatiindia’s Parliament?

With close to 700,000 security forces stationed within its borders—one Indian soldier for every 17 to 18 residents—Kashmir is home to the most densely militarized and the most under-reported occupation on the planet today—far from our collective well-intentioned consciousness. Since the tension in the region returned to armed struggle in the early 90s, and with “boots on the ground” controlling almost every aspect of the daily lives of the Kashmiri people, the Indian state has extended its tentacles into institutions like the judiciary, media and bureaucracy, completing its grip on the country. This has directly resulted in more than 70,000 deaths, enforced and involuntary disappearance of more than 8,000 people, reports of more than 6,000 unmarked mass graves, and continuous extra-judicial killings, torture and rapes.

Around the same time as the JNU movement took center stage in the country’s right-to-dissent arena, on February 14th, 2014, the 22-year-old recent graduate Shaista Hameed and the 19-year-old engineering student Danish Farooq were killed by security forces. Shaista and Danish were among a crowd protesting the killing of a local youth who died resisting occupation.

While we seldom see or hear news of murders like those of Danish Farooq and Shaista Hameed, some of us are now being forced to witness other, more visible atrocities like that inflicted on our Adivasi mother and school teacher Soni Sori—perhaps because there is only so much that can be hidden. But it puts her no less in the target sights of Jatiindia than Vinay, Farooq and Shaista, or for that matter, her journalist nephew Lingaram Kodopi, who along with Sori has spend most of his adult life exposing the scandal of resource exploitation in the states of Chhattisgarh, Odisha and Jharkhand. The price of such exploitation has included deforestation, the uprooting of indigenous populations from their land, the burning and razing of their homes to the ground by police and paramilitary forces, the torture and rape of people both outside and inside jails, and a long, long list of other dehumanizing tactics by the state and its corporate allies.

Occupation and exploitation are the names of the corporate-hegemonic power game. Silencing dissent and resistance at all costs keeps Jatiindia shining with targets old and new.

4 thoughts on “Jatiindia: A Flag of Atrocities Caste, Present and Future”