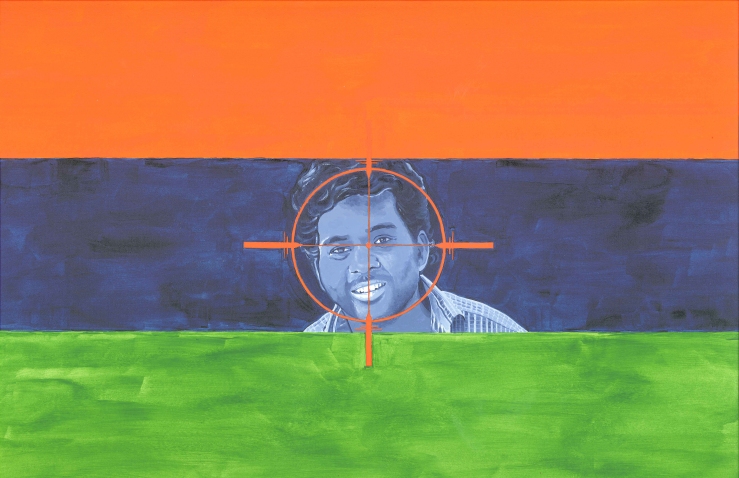 We are so cutoff from those targeted by our governments and their corporate bedfellows, and our histories are so saturated with unspoken atrocities, that there are not enough elite hands in this world to participate in this vision I describe below. And it would also mean discarding monocrop patriotism with a more diverse one because there is no one symbolic flag in which to pack it in.

But nevertheless, imagine a scene with thousands of protestors in today’s caste-and-capitalist India, taking to the street and chanting slogans of accountability, both from their own government—past and present—and more importantly their own citizen hearts, waving not one symbolic, patriotic flag, but many, each with a different face of exclusion at the heart of it.

A citizen-sea of twice-born faces waving faces of citizen-exclusion. Faces of those who have paid and are continuing to pay the ultimate price for confronting power with truth at various times in the country’s history. Resisting religious and economic fundamentalism and asserting their human right to dignity, inclusion, equality and justice—the stuff we take so much for granted. The only difference between them is that the hand that waves the flag is a beneficiary of the world’s largest democracy….I mean, the world’s largest hypocrisy (i.e., JatiIndia, my name for our nation of jatis/castes.)

The faces on the flags waving in this hypocritical Delhi breeze would belong to the oppressed, the excluded, the other—Dalits, Adivasis, occupied Kashmiris, india’s northeasterners, and others. Their exclusion is squeezed between the old and the new, between the dogmas of religious scriptures and state sponsored terrorism. Anyone who questions and resists these dogmas is speedily labeled with a T word, as a “terrorist” or a “traitor.” Despite that, today people are taking to the streets and questioning the irrational hand of authority.

“My birth is my fatal accident,” wrote Rohith Vemula. He was the 26-year-old son of a landless Dalit mother, who hanged himself in a student hostel room on January 17th, 2016. A research scholar at the University of Hyderabad (HCU) and a student activist of the Ambedkar Students Association (ASA), he dreamed of one day becoming “a writer of science, like Carl Sagan.” That dream is gone now, but the suicide letter he wrote and left behind for us will not only send chills up your spine and make you weep; it might well change the course of Indian caste history, because it exposes the plight of those born Dalits in India like nothing that came before it.

Suicides among bright Dalit scholars are not a new phenomenon. National Crime Research Bureau surveys from the 1950s up until last year reveal that caste atrocities that drive these suicides have risen from 33,507 in 2001 to 47,064 in 2014. According to writer and democratic rights activist Anand Teltumbde, “The reason can be traced to the social Darwinist ethos of neoliberalism which reversed the welfarist paradigm created by Keynesian economics. Its social implications contra-intuitively resonate with the upsurge of Hindutva forces in the country, evidenced by the BJP’s rise from a marginal position in the 1980s to be the contender for political power at the center….The strategy of the hindutva camp is to brahmanize common folks of the dalits and to demonize the radical dalits. As dissenting Muslim youth are branded terrorist, dalit-adivasi youth are being stamped as extremists, casteist and anti-nationals.” To read more about the background of Rohit’s suicide please read Teltumbde’s article.

Now below is the full text of Rohit’s suicide letter:

I would not be around when you read this letter. Don’t get angry on me. I know some of you truly cared for me, loved me and treated me very well. I have no complaints on anyone. It was always with myself I had problems. I feel a growing gap between my soul and my body. And I have become a monster. I always wanted to be a writer. A writer of science, like Carl Sagan. At last, this is the only letter I am getting to write.

I loved Science, Stars, Nature, but then I loved people without knowing that people have long since divorced from nature. Our feelings are second handed. Our love is constructed. Our beliefs colored. Our originality valid through artificial art. It has become truly difficult to love without getting hurt.

The value of a man was reduced to his immediate identity and nearest possibility. To a vote. To a number. To a thing. Never was a man treated as a mind. As a glorious thing made up of star dust. In every field, in studies, in streets, in politics, and in dying and living.

I am writing this kind of letter for the first time. My first time of a final letter. Forgive me if I fail to make sense.

May be I was wrong, all the while, in understanding world. In understanding love, pain, life, death. There was no urgency. But I always was rushing. Desperate to start a life. All the while, some people, for them, life itself is curse. My birth is my fatal accident. I can never recover from my childhood loneliness. The unappreciated child from my past.

I am not hurt at this moment. I am not sad. I am just empty. Unconcerned about myself. That’s pathetic. And that’s why I am doing this.

People may dub me as a coward. And selfish, or stupid once I am gone. I am not bothered about what I am called. I don’t believe in after-death stories, ghosts, or spirits. If there is anything at all I believe, I believe that I can travel to the stars. And know about the other worlds.

If you, who is reading this letter can do anything for me, I have to get 7 months of my fellowship, one lakh and seventy five thousand rupees. Please see to it that my family is paid that. I have to give some 40 thousand to Ramji. He never asked them back. But please pay that to him from that.

Let my funeral be silent and smooth. Behave like I just appeared and gone. Do not shed tears for me. Know that I am happy dead than being alive.

“From shadows to the stars.”

Uma anna, sorry for using your room for this thing.

To ASA family, sorry for disappointing all of you. You loved me very much. I wish all the very best for the future.

For one last time,

I forgot to write the formalities. No one is responsible for my this act of killing myself. No one has instigated me, whether by their acts or by their words to this act. This is my decision and I am the only one responsible for this. Do not trouble my friends and enemies on this after I am gone.

I have chosen Rohit’s story as the first of this series of painted flags, JatiIndia: A Flag of Atrocities Caste, Present and Future. And for all of them, I have chosen saffron as the color of the top bar, to symbolize long-existing casteism, now more open and feverish with resurgent hindutva politics. I have chosen blue for the middle bar, because it is the color historically adopted by the Dalit movement; however, in my flags it will signify all of India’s oppressed people. I have chosen green for the bottom bar, to symbolize India’s ecological foundations, which are endangered by the ideology of neoliberalism and defended by our Adivasis and other oppressed people.

The circular image in the center of each flag will signify a target viewed through a weapon’s saffron (indicating right-wing nationalism) crosshairs. Between the past and present this serieswill go back and forth in no particular order bringing forward some of the targeted faces of resistance that have challenged the stagnant ideology of exclusion of the world’s largest hypocrisy.

Meanwhile, the next in this series is the story of Soni Sori, an Adivasi school teacher….

4 thoughts on “Jatiindia: A Flag of Atrocities Caste, Present and Future”