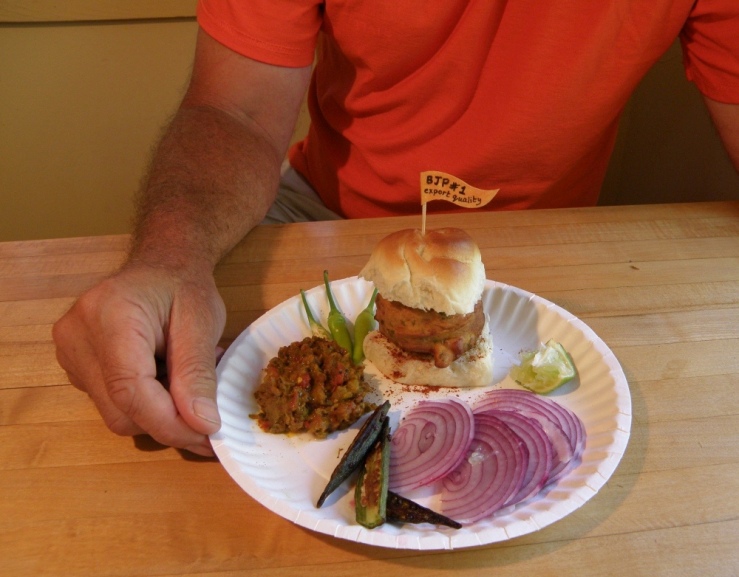 Includes a recipe brought to you by Discomfort Foods

Today India is the largest exporter of beef in the world. But not the holy, white kind–rather, the not-so-holy kind: carabeef, or water buffalo meat. Last year India pushed Brazil from the # 1 position earning a whopping $4.8 billion from carabeef export. At the same time, on the domestic front in early March this year, the state of Maharashtra extended a ban on cow slaughter to include bulls and bullocks. Professor Kancha Ilaiah, Director of Centre for Studies in Social Exclusion and Inclusive Policy in an interview says of this ban, “It’s racism and casteism. It’s racial because the buffalo is black. Why is black bad? They want to kill it like the white Americans did. The Aryan racist idea came into that. They drink the milk because it is white.” So, dark buffalo gives white milk but doesn’t qualify as sacred.

India’s foreign and domestic policies, especially since the early 90’s, have been widening the gap between beneficiaries and losers. If you live in the city and you’re upper-caste (especially Hindu), you have white democracy on your side in some gradation or the other, and the largest-beef-exporter label might benefit you. But if you happen to live in the city as a minority (poor Muslim, poor Christian, Dalit, etc), or live in the countryside and are also a Dalit, Backward Caste, or Adivasi (indigenous person), well then you have dark democracy on your side, and the cow/bull/bullock slaughter ban directly affects you.

This pro-Hindu identity agenda is all part of the collective psychosis that some of us refer to when we talk about a post neo-liberalism scenario, where deep-rooted cultural fanatical belief systems are merging with capitalism. It creates monsters, like brothers Ram and Mukesh Singh, who, among others, were responsible for the much publicized, brutal rape, torture and murder of a young woman in Delhi, and the upper-caste men who routinely and brutally rape, torture and murder Dalit women in most every corner of the countryside, outside the media spotlight. Sacred is birthright is white is profit is pure is upper caste is media is #1 beef exporter. Not-so-holy is black is Dalit is Muslim is indigenous is polluted is poverty is birth-no-rights is no media is beef ban. It’s racial hypocrisy that exists like nowhere else in the world.

If Hindu scriptures were an advertising manual, then our Brahmin ancestors were its art directors and copywriters all in one. It has always been about commercializing, branding, marketing and usurping, which has taken on an especially violent edge with capitalism, which is more indifferent to the suffering of the country’s majority poor than anything that came before.

Eating beef has become a political issue within India. Kancha Ilaiah goes on to say that the state is becoming more and more theocratic: “Large number of tribes, Dalits and Backward Castes have a historical food culture of beef….the source of affordable protein food for the poor….This is how the RSS [right-wing] ideology is being pushed….This will destroy the cattle economy itself. Who will nurture bulls, cows and buffalos, which are neither useful for agriculture nor useful for meat? How will the people who are involved in the butchery and sale, who are particularly Muslims and Dalits, live once this is stopped?” It is an upper-caste imposition of so-called sacred values (and costly feed-and-fodder bills) on the rest of the population.

In fact, this ban does nothing other than satisfy a stubborn Hindu whim, much to the chagrin of the aging slaughter-spared cattle themselves. The mindset of the ban proponents is similar to those of the pro-life screamers in the US. We all know that the anti abortion fanatics are really pro-birth, because as Sister Joan Chittister so eloquently says of them, “your morality is deeply lacking if all you want is a child born but not a child fed, not a child educated, not a child housed.” The same logic can be applied to the warped mindset of decision makers in India intensified by Narendra Modi and the ruling Bharatiya Janata Party (BJP) that imposed this ban on a certain caste of cattle while not on another. They are also pro-birth and anti-mercy. When it comes to the attitude toward cattle in India things aren’t as black and white as they seem. It really is a dog’s life (a street-dog’s life, that is) for a majority of the country’s cattle population.

As part of a project entitled: One Pound Capitalism, a Pinch of Democracy, I am designing recipes highlighting issues that expose the extreme consequences of neoliberal policies. So, the type and quantity of each ingredient I use in the recipe is determined by choosing key statistics that are embedded in the issue I’m focusing on, converting that to a measurement, and then using it in the recipe. Indeed, there may be a dish or two that tastes somewhat strange, with an ingredient or two out of whack. But that’s intended to help make the point.

Put the minced meat and ingredients 1 through 4 in 2.4 cups of water in a saucepan and bring to a boil. Turn heat down to medium and cook for 30 minutes. Let cool.

Dry-roast ingredients 5 through 10 for a couple of minutes on a medium flame. Grind to a powder.

Put 10 tbsp water and 1/8 tsp salt in a pan, add the washed rice and bring to a boil. Turn heat down to low and simmer, covered, for 12 minutes. When cool, wet your hands a little and roll cooked rice into 12 balls. Lightly press the 8 pieces of roasted cashews on most of the rice balls, breaking one or two in half.

When the meat/dal concoction cools, drain the water and grind it in a food processor. Add the dry-roasted ground spices, minced onion, turmeric powder, jowar and egg to meat mixture and mix well. Divide into 12 portions and wrap around each of the 12 rice balls till the rice balls are completely covered. Gradually add some water to the besan till it reaches the consistency of mayonnaise (Use an egg beater to mix the water in so clumps don’t form.) Mix in the chopped cilantro and salt to taste to the besan paste. Heat oil in a pan and using a spoon, carefully dunk the meat balls first into the besan paste coating it evenly, then pick up the meat ball with the same spoon and slide it gently into the hot oil. Turn the heat down to medium and cook meat balls about 2 minutes on each side. Kebab bondas are ready.

Chop the karela into pieces and grind in a food processor. Sprinkle a little salt on it, cover and set aside. After about 30 minutes, squeeze all the water out of the karela by pressing it between your hands. Heat oil in a pan, add mustard seeds. When they begin to splutter, add the urad dal. Once the dal starts to turn brown add the curry leaves. After a few seconds add the chopped onion and saute for three minutes on medium-high flame. Then add the ginger and garlic paste and saute for another 30 seconds. Add the karela, mix in, turn the flame down to medium-low, cover and cook for about 20 minutes, adding a few sprinklings of water and stirring from time to time to make sure it doesn’t burn on the bottom. Add the chopped tomatoes, chili and turmeric powder, chopped green chili, brown sugar, tamarind pulp, cover and cook for another 10 minutes, stirring occasionally.

Cut 15 bhendis in half. Heat 1 tbsp oil in a skillet and when it gets nice and hot (after about a minute) throw the sliced bhendi in and saute on medium heat till crisp (about 10 minutes).

Warm the dinner rolls, slice in half, put a little butter, sprinkle a little chili powder, and place hot kebab bondas inside. Enjoy with bhendi chips, 31 chilis, and 45 slices of red onion distributed equally between the 12 servings, along with a little karela chutney. Squeeze a little lemon on everything.

Ingredient measurements in order of appearance in the recipe: India is #1 exporter of beef in the world; In the country’s 18 states, cow slaughter is completely banned; Anyone caught selling or in possession of beef can get a jail term of up to 5 years; India is the fifth largest meat producer in the world; In 2014 India earned more from export of carabeef than it did from basmati rice; 8 states have no ban on cow slaughter, including in Kerala where the animal must be over 10 years old; Last year the country earned $4.8 billion from carabeef exports; Maharashtra is averaging ten farmer’s suicides a day for the past ten years, occurring primarily in the cash-crop growing areas. Food staples of the region like jowar (sorghum) that used to grow abundantly has now virtually been abandoned because of factors driven by state policies such as debt, high input costs, animal menace, water-use patterns, and catastrophic price shocks; Beef consumption within the country has been falling and was down 44.5 percent last year; Over 80 percent of buffalo meat is exported to Asia. I used karela (the Indian word for bitter melon) for the chutney which is eaten in other South East Asian countries. The Vietnamese word for it is khổ qua; In 2015 India exported 2.4 million tons of beef and veal meat; 3 states, Assam, Tamil Nadu and West Bengal allow slaughter with certificates; Africa is the recipient of 15 percent of India’s beef export; India’s chicken consumption rose by 31 percent between 2000 and 2014; Vietnam is the largest recipient (45 percent) of India’s beef exports.

2 thoughts on “One Pound Capitalism, a Pinch of Democracy, and the Not-So-Holy Buffalo”